skip to main | skip to sidebar

Our Marines got married!

It was, without a doubt, the most beautiful wedding we've ever had here. First of all, the bride is just a knockout. All those men in full dress uniforms -with swords!- aren't bad, either. :) The bridesmaids were all lovely and were all also Marines. Ranking officer of the whole bunch? The bride.

It was so spectacular. First, the two sergeants posted, left and right of the aisle. Then I walked down with the groom, best man, and two lieutenants. From all the way back by the pond, one at a time, came each bridesmaid and then the little flower girl and ring bearer, following by the bride. At the beginning of the aisle down at the chapel, she was joined by both her parents, who walked her down the aisle and gave her hand to her groom. The parents were seated and the ceremony continued in the traditional manner, with two notable departures: the Lazo and Arras ceremonies. From the vows:

At this time, we honor Jeniffer’s heritage with two traditional ceremonies, the Lazo and Arras.

The Mexican wedding tradition of the Lariat, or Lazo, binds the bride and groom together, symbolizing their unity. Scott & Jeniffer will be bound by Jeniffer's grandparents, Jesse & Paula. The lazo, symbolic of the rosary, encircles them with God’s love and protection, as we join together to ask God’s blessing on this marriage, and also represents Scott & Jeniffer’s love for each other, which will bind the couple together every day of their lives. The gift of the Lasso is an expression of honor and hope and love from Jesse & Paula for Scott & Jeniffer.

The ceremony of the Arras is a presentation of 13 coins, the number of coins representing Christ and his apostles. In times past, this was the dowry from the bride’s family to the groom, and the groom placed the coins in the brides hands, pledging to support her and entrust all his wealth into her care and safekeeping, with full confidence.Acceptance by the bride meant taking that trust and confidence unconditionally, and with total dedication and prudence.

Today, Jeniffer's godparents, Ben & Gloria, will present the Arras, which have been blessed by Jeniffer’s priest, Father James.

Scott, as you pass the coins to Jeniffer, repeat after me:
Lo mio es tuyo y lo tuyo es mio -What is mine is yours and what is yours is mine

Jeniffer, as you return the coins to Scott, repeat after me:Lo mio es tuyo y lo tuyo es mio -What is mine is yours and what is yours is mine

Jeniffer's grandparents both move with difficulty, but they were determined to make the trip down the aisle not once, but twice: first to place the lazo around the shoulders of the couple, and then to remove it at the end of the ceremony. It was an especially beautiful double rosary, of gold chain with jewels. The arras were gold coins (about the size of dimes) in a small gold carriage reminiscent of Cinderella.

Once the wedding service was complete, the wedding party filed out, and the lieutenants joined the two Marines standing guard. Two small girls (Desiree & Martinique) ran up the aisle to the lieutenants and then solemnly presented them with their hats ('covers'). The men put on their hats and came to attention. Then it was time for the newlyweds to walk back up the aisle. The Marines all drew their swords and crossed them overhead for the couple to pass under. And of course, as they went through the last arch, one of the fellows smacked the bride's butt with his sword. :)

Here's one picture, where all the fellows looked away so their boss could steal a kiss from her new hubby!

Ok, the heartbreaker: This is the couple who found us from Iraq and made their reservations from there. The bride has recently been rotated back to the States. The groom, however, is on leave. They'll be with us all week for their honeymoon, and then the groom leaves again for Iraq. At least one of the groomsmen you see in this photo will also return to Iraq by the end of the month. One has *asked* to return, as has the bride.

They didn't get all those medals for nothing. (Check out Joe, on the right - he has so many medals they hang in TWO rows!)
Ok, the fun part: at the end of the reception, the groom's mother put on 'Duke of Earl' and the groom gave a hilarious lip-synch rendition to his new bride. 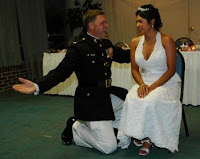 Posted by Wedding Fairy Godmother at 4:32 PM No comments: